A double eyelid surgery (sometimes called “Asian blepharoplasty”) is a plastic surgery procedure that aims to create a palpebral fold or reposition an existing palpebral fold of the upper eyelids in a patient with Asian-shaped eyelids. This type of eyelid is very common among the Asian population but can also observed in the Westerners. The objective of a double eyelid surgery is less to Westernize the shape of eyes than to embellish it, to make eyes almond-shaped.

What is a double eyelid surgery?

An Asian blepharoplasty (or double eyelid surgery) is a plastic surgery procedure that concerns patients who have no crease in the upper eyelid (approximately 50% of the Asian population). Due to the lack of crease, the eyelid appears as curtains between the eyebrows and eyelashes. The eye feels “closed” and tired.

A double eyelid surgery aims to create a palpebral fold or reposition an existing palpebral fold in patient with Asian-shaped eyelids of Asian, which can also be seen in Westerners. For these patients, a blepharoplasty makes the eye wider and more almond-shaped. The look seems younger and more attractive. 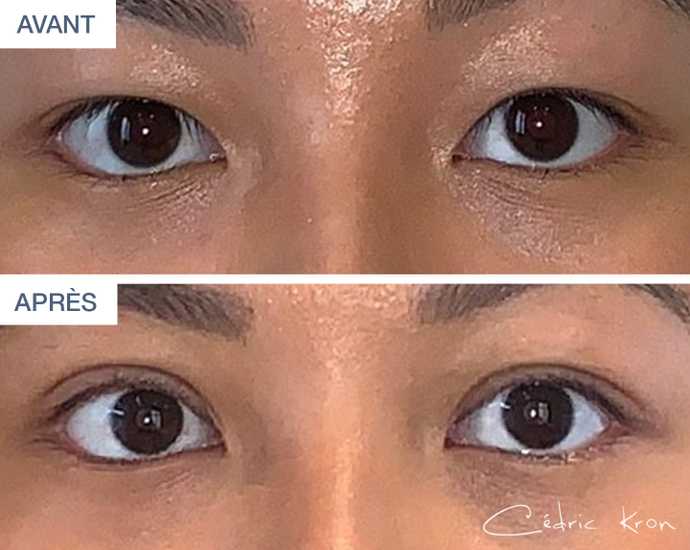 Three techniques can be considered for a double eyelid surgery

During the preoperative examination, the surgeon will describe the risks and benefits of each Asian blepharoplasty technique and will advise the patient on the most appropriate technique with regard to his initial anatomy (including the tissue characteristics of his eyelids).

Before surgery, the surgeon will define precisely with the patient the position of the fold that will be created on the eyelids. In general, the fold is at a height of 6 to 8 mm of the eyebrow for women and 5 to 7 mm for men.

The different techniques used for an Asian blepharoplasty are all based on the same principle: a palpebral fold is created by binding the skin of the eyelid to the fascia (fibrous membrane) of the orbicularis muscle.

Technique with skin incision along the eyelid

This technique of Asian-style eyelid surgery involves making a horizontal incision along the eyelid at the level previously defined with the patient. At first, the skin is dissociated from the orbicularis muscle to the eyelash so as to make the surface flatter. Fat tissues located under the muscle may be removed to reveal the fascia (fibrous membrane). Sutures are finally made along the incision, between the skin and the fascia.

This technique suits patients with young or elderly eyelids. It can be associated with a ptosis correction (tissue relaxation) as well as a fat removal.

Advantages of the technique with skin incision:

Disadvantages of the technique with skin incision:

The visibility of this scar will depend on the quality of the patient's skin. A young and elastic skin will allow better healing and will make the scar very little visible. The scar will be more visible in patients with dark, dry skin. Conversely, it will be less visible in patients with light and oily skin. In all cases, this scar is detectable only when the eyes are closed.

For patients whose skin does not have the properties ensuring fast recovery, it is possible to consider a technique without incision (called "percutaneous").

For some patients, it is possible to perform an Asian blepharoplasty that does not involve an eyelid incision (percutaneous technique). This avoids any scar on the eyelid.

From the inside of the upper eyelid, 5 to 6 incisions are made by needle. Stitches are made between the tarsus and the marked line for the new palpebral fold. The use of beads helps protect the skin of the eyelid that could be cut by the son. The threads are removed 5 to 6 days after the procedure.

This incision-free technique is particularly appropriate for patients who absolutely want to avoid a scar, as well as in patients who wish to further mark an existing palpebral fold.

Advantages of the pearls technique:

Disadvantages of the pearls technique:

In this technique of double eyelid blepharoplasty, 3 to 5 incisions of a length of between 2 and 3 mm are performed at the desired level for the palpebral fold. This incision divides the orbicularis muscle. The fatty tissues are then removed in the pre-tarsal area and the fascia. The fact of roughing these tissues allows a better adhesion between the tarsus and the dermis. A stitch is then made at the lower perimeter of each incision, between the fascia and the dermis. Another stitch allows to close the incision in the skin of the eyelid.

This procedure is indicated in patients who do not show excess skin and whose tissues are low in fat.

Advantages of the mini incision:

Recovery after an Asian blepharoplasty 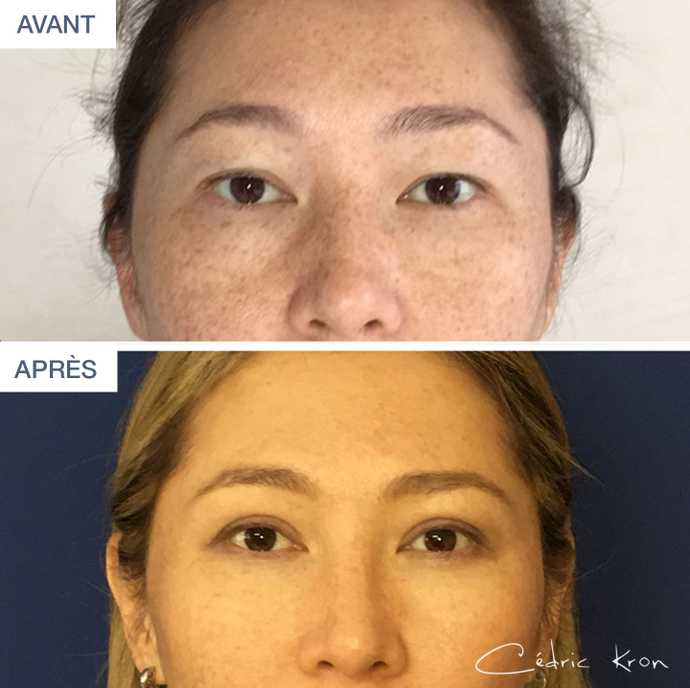 Description of the procedure

The operation is most often performed with a day hospitalization (a few hours only). When double eyelid procedure is associated with other surgical procedures (such as face lift, ...), an overnight stay may be necessary.

A blepharoplasty does not cause real pain but can cause some discomfort: feeling of tension of the eyelids, slight irritation of the eyes, some visual disturbances during the first day after the operation.

Cold compresses should be applied as often as possible during the first 48 hours.

Any major effort should be avoided during the first three days.

The wires are removed to the surgeon's office after 3 to 6 days.

Post-operative effects are mainly marked by the appearance of edema (swelling) and bruising whose importance and duration varies depending on the patient and the technique used.

Scars may remain a little pink during the first weeks but eyelid makeup is quickly possible (the day after removal of the threads).

The duration of the edema depends on the type of technique used, relatively short in the case of the technique without incision (approximately two weeks) and longer in interventions involving an incision.

It is possible that the vision is slightly blurred during the first days due to edema. If the vision gradually decreases, on one or both eyes, you should immediately contact your surgeon.

Sometimes during the first days it is impossible to completely close the eyelids or a slight detachment of the outer corner of the eye that no longer applies perfectly on the globe. Do not worry about these signs because they usually disappear quickly.

Smoking increases the risk of complications from any surgery such as a double eyelid surgery. Stopping smoking 6-8 weeks before the procedure eliminates this additional risk. If you smoke, talk to your doctor, surgeon, and anesthesiologist, or call Tobacco-Info-Service at 3989 to help reduce risk and put the odds on your side. 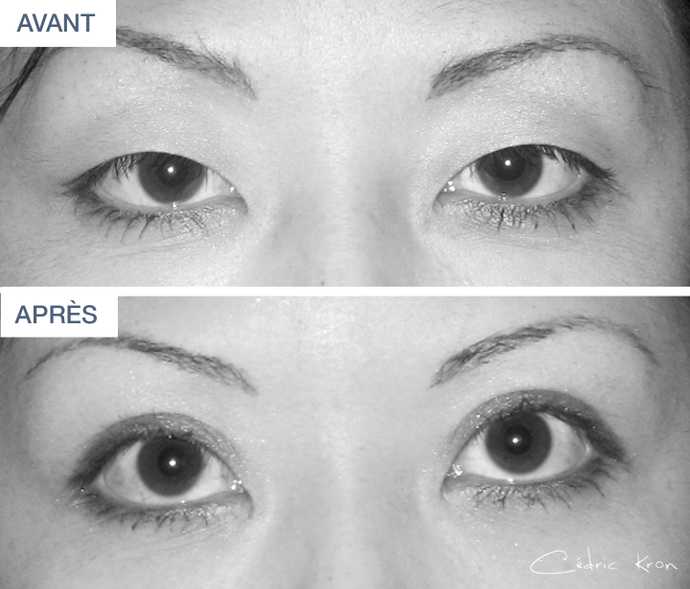 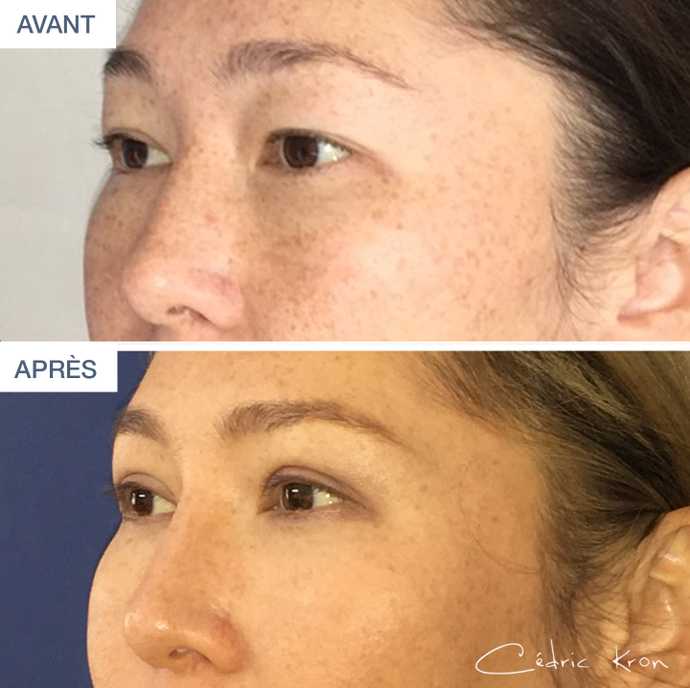 > See more before & after photos

If you have any question about double eyelid surgery, please send us your contact information.