A liposuction removes radically and permanently localized fatin excess. It is not a method of weight loss, but a method of remodeling forms, a way to remove localized fat that is difficult to lose with a diet or by exercising a sports. A liposuction helps to refine a figure and make it more harmonious after losing weight, sometimes before or during.

The principle of a lipoaspiration

A lipoaspiration is performed on areas of the body such as:

What is a liposuction

A liposuction consists of an introduction, in short incisions (2 to 5 mm), of cannulas with rounded ends, that perforate at their end several orifices. The cannulae are connected to a closed circuit in which a negative pressure will be created, allowing the suction of fat cells (both deep and superficial fat cells).

Removal of fat cells is done regularly by respecting the layer of fat under the skin to avoid any irregularities. The superficial cellulite is therefore little modified.

Due to the use of very fine cannulas, the appearance of the skin can be improved by the skin retraction that follows during the recovery.

Coolsculpting and Keybody-Lipo are two aesthetic medicine techniques that provide results comparable to liposuction, especially when the fat in excess is moderate.

These two treatments use different techniques (use of cold in the case of Coolsculpting and Electromagnetic Energy in EMSculpt) to permanently remove fat, without surgery, hospitalization or anesthesia.

Dr. Kron tends to favor Keybody-Lipo and cryolipolysis by Coolsculpting when fat suppression is the only indication treated.

Recovery after a liposuction

The duration of the procedure, usually from 30 minutes to 2 hours, varies according to the amount of fat and the number of areas to be treated. Liposuction is performed under general anesthesia, loco-regional (spinal anesthesia, epidural), or local anesthesia (neuroleptanalgesia) according to its importance.

Duration of the hospitalization

The duration of hospitalization varies according to the amount of fat extracted. The procedure can be performed with a day only hospitalization in the case of small liposuctions. In case of volume or important treated areas, a hospitalization of one day and one night can be necessary.

The recovery time following liposuction is proportional to the amount of fat extracted and the number of areas treated.

The discomfort and pain following the operation are generally moderate. A feeling of tiredness can be felt during the first days. Some areas are more painful than others, such as the hips.

Bruising and edema usually occur in the treated areas. Moderate compression is applied to the treated areas (sheath or panty) to improve comfort. It will remain in place for a fortnight minimum.

A postoperative physiotherapy, based on lymphatic drainage and early massage from the 3rd, 4th day following the procedure allows a faster recovery and a better comfort by draining the edema and the bruises even before they have the time to settle. Possible disorders of skin sensitivity regress in a few weeks.

It is possible to resume sport activities three weeks after the intervention.

It is best not to expose the treated areas to the sun for about three weeks, the time of disappearance of all bruising and 75-80% of the edema.

Result of a liposuction

If the result of a liposuction can be clearly visible at the end of the procedure. Then it will be masked in part by the installation of the postoperative edema.

After three weeks, the result begins to reappear with gradual resorption of edema. The skin, however, takes about 3 to 6 months to fully retract on the new curves and readapt to the new silhouette.

When can I appreciate the result?

The final result can be assessed within this period of 6 months after the procedure, after the total disappearance of the edema and the complete retraction of the skin opposite. The results obtained are long-lasting because the fat cells are permanently removed (they only multiply during growth in childhood). Those that remain can increase in size in case of weight gain, but in this case, in a more harmonious way, since the "unsightly" fat cells have been removed.

Amplify the result of a liposuction

In addition to liposuction, XBody muscle electro-stimulation sessions can be indicated to optimize and amplify the result of the procedure. XBody makes it possible to develop the muscular architecture, to "dry" the skin (attenuation of cellulite or orange peel).

Imperfections and risks of possible complications

In some cases, localized imperfections may be observed: insufficient correction, residual asymmetry, unevenness of the surface.

These imperfections can usually be treated during an outpatient "retouching" procedure from the sixth month following the operation. They are not so much due to the surgeon's work as to the hazards of healing and possible weight variations following the intervention.

Early post-operative massage physiotherapy and skin mobilization and lymphatic drainage help to limit these risks. If the cases of complications suites liposuction are rare, consider that this is a surgical procedure that involves the risks of anesthesia and medical procedure (see The Risks in surgery).

Smoking increases risk of surgical complications of any surgery: Stopping smoking 6-8 weeks before the procedure eliminates this additional risk.If you smoke, talk to your doctor, surgeon and anesthesiologist or call the Tobacco-Info-Service line. 3989 to help you reduce risk and put the odds on your side.Infections are extremely rare and are prevented by prophylactic antibiotic treatment.In case of pain in the calf, we can fear a phlebitis that requires contact with the anesthesiologist or the surgeon An anticoagulant is often prescribed as a preventive for 10 days 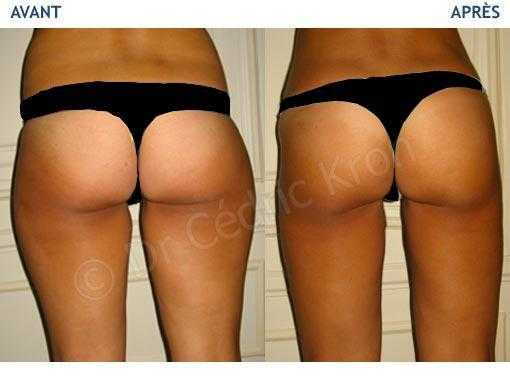 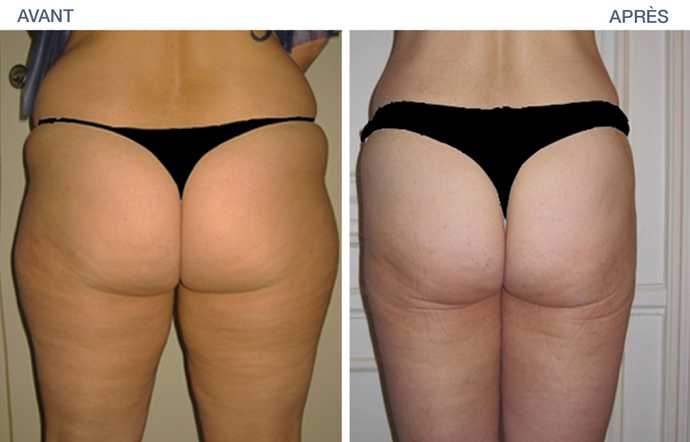 > Consult the before and after photos of liposuction

If you have any question about liposuction procedures, please send us your contact information.