EarFold implants permanently correct the shape of prominent ears (or “protruding ears”), during a simple and fast intervention with very short recovery. This minimally invasive procedure is an effective alternative to conventional surgical techniques for the correction of loose ears.

EarFold implants have many advantages over an otoplasty. The procedure is performed in 20 minutes directly in the surgeon's practice, does not imply post-operative effects and offers an immediate result.

This technique can be considered an “otoplasty without surgery” in clinic as it is usually understood. It is all the same a surgical intervention which is carried out in medical office under local anesthesia very localized like a "dermatological" intervention or a dental care.

The principle of EarFold implants

The principle of earFold treatment is to correct or accentuate the plication of the anthelix, the most common cause of ear prominence.

The earFold memory implants are made of Nitinol, a nickel and titanium alloy that has already been proven in the medical field. This alloy is especially used for stents for patients suffering from heart disease. This particularly elastic material keeps its shape permanently. It allows the cartilage of the ear to retain all its flexibility but also to always find its new shape.

The implant is covered with a thin layer of 24-carat gold medical grade that allows it to remain invisible under the skin. 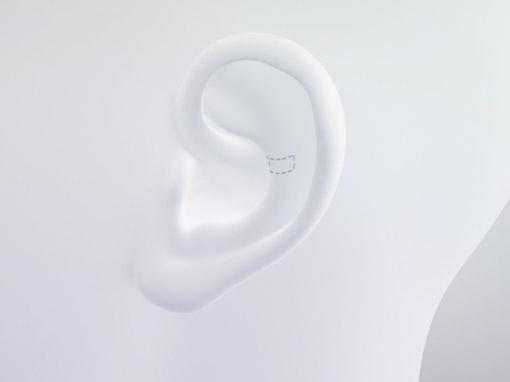 Who is this intervention for?

The earFold implants are a recommended procedure for patients who want to correct prominent ears, correct an ear malformation or rebalance the symmetry of the ears. EarFold is especially for people who suffer from the absence or underdevelopment of the anti-helix crease, which is the cause of the majority of prominent ears.

What kind of ear can be corrected with earFold?

The Earfold implants appear as an alternative to a surgery of the prominent ears generally implying a half-day hospitalization as well as the wearing of bands of contention after the procedure (permanently for 10 days, then only the night for a 20 additional days).

This technique of correction of the shape of the ears is not indicated when the malformation concerns the conch or when the cartilage of the ear must be reduced. For the patient who presents a significant malformation, a surgical otoplasty will achieve a better aesthetic result.

Children and teens who suffer from prominent ears and ear malformation can also benefit from this much less invasive technique than an otoplasty.

Dr. Kron is one of the first French surgeons to have practiced Earfold implants. He was trained directly by the inventor of the procedure: Norbert Kang, an English surgeon practicing at the Royal Free Hospital in London.

The procedure: the installation of EarFold implants

Predict the result before the intervention

In order to determine the desired result, the surgeon will first use the preFold TM positioning system. Placed on the plication of the antihelix, during your consultation, it allows to precisely predict the location where the implant should be placed with you, as well as the desired degree of correction.

The patient can therefore evaluate the result of the procedure before implant placement. The preFold device also determines whether one or two implants should be used to achieve the desired result on each side. 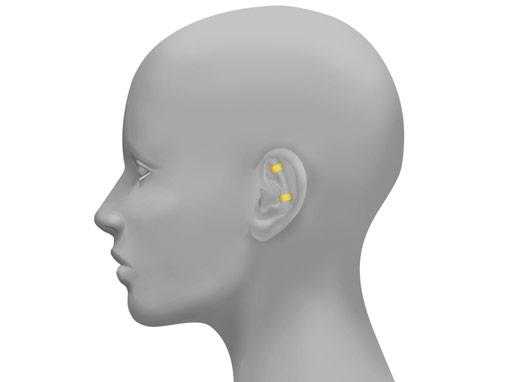 Once the position of the implant is determined, it is marked by the surgeon who then practices a small incision (1 cm). Local anesthesia makes implant placement completely painless.

Once the implants are positioned, the incision is closed by one or two small resorbable sutures. No bandage is necessary following the procedure.

The placement of the earFold implants is only possible after an initial consultation. On the one hand, this allows to decide with the surgeon on the position of the implants and. On the other hand, it allows to visualize the result obtained in terms of correction of the detachment. A minimum of 15 days is required between the initial consultation (submission of the estimate price) and the placement of the implants. 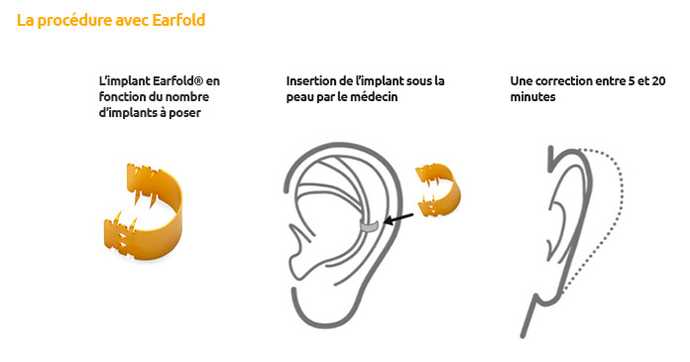 The installation of EarFold implants is performed directly in the surgeon's office and lasts only 20 to 30 minutes on average.

Once in place, the implant clings to the cartilage of the ear so as to correct the shape immediately and permanently because of its memory-shape stucture. That's why no post-treatment bandage is needed.

Since this is a very minimally invasive technique, the post-operative side-effects of the procedure are very limited. It does not involve bruising (blue) or swelling (edema) in the treated area.

At the end of the intervention, it is possible to immediately resume the activities of everyday life.

Slight pain can be felt during the first few days following the placement of Earfold implants. Simple analgesics can completely limit these possible inconveniences.

Some patients may experience discomfort when sleeping on the treated ear side. This discomfort naturally disappears after a few weeks.

The advantages of Earfold implants compared to an otoplasty

Before & After: Correction of prominent ears with earFold implants 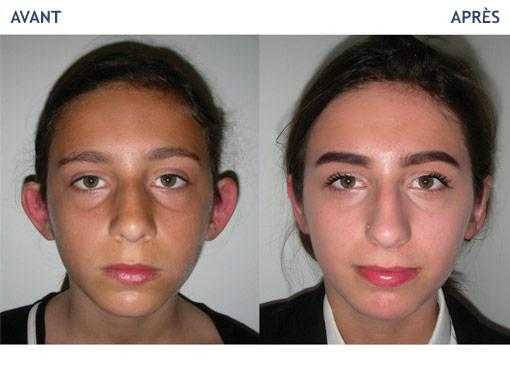 Photographs made available by the laboratory..

If you have any question about earfold implants, please send us your contact information.